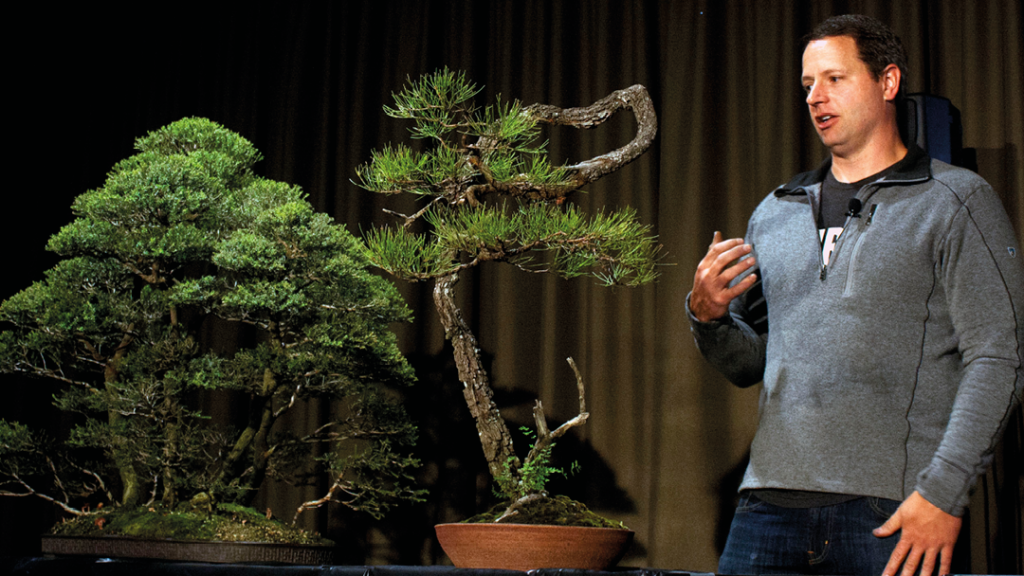 The AABC 2019 convention, the very first major event of its kind, focused entirely on Australian native species. The trees on display did not disappoint. Native trees of all shapes, species and sizes were there, the level and quality of which had risen exponentially.

There was much discussion about why we were bringing over an American to headline an event on Australian species. A valid point, but the fact remains that as a country we’re still ‘new’ to bonsai and even fresher at exploring the potential in our own back yard. So why not have someone who is pioneering that process in his own country? Ryan was quick to show why he was the man for the job, as he meticulously worked his way through the material during his demos.

While Ryan continued to work, local artist Marcela Ferreira took to the stage to give a presentation dispelling the ‘Myths and Misconceptions’ we have of our native material. There was a brief, but most interesting discussion on the antiquated beliefs some of us still hold on to.
Next saw another home-grown talent, Hugh Grant, take to the stage in parallel with Ryan to work on a Kunzea. Hugh had collected both pieces being worked on that day, so his depth of knowledge of the horticulture and history of the material was invaluable.

Rugged, sharp, thin, sleek… The character of the tree is influencing me here

Leigh Taafe, the curator of the National Bonsai and Penjing Collection of Australia (NBPCA) during the Gala dinner handed out the award for ‘Best Australian Style’. This award is given annually at the AABC convention. It doesn’t necessarily go to the ‘best bonsai’ on display, but rather the tree that best captures the unique design elements we apply to our trees in Australia. This year, the award went to Marcela Ferreira for her Melaleuca styphelioides. Marcela works tirelessly for the advancement of Australian native bonsai.
For the final unique presentation of the day Quentin Valentine and Rod Verwoert took to the stage for a session of ‘virtual design and critique’. With Photoshop, Rod skilfully manipulated photos of trees in nature as the crowd gave suggestions and plenty of advice to transform the trees into presentable ‘bonsai’.

Reflecting back on it all, the ideas that were passed around over the weekend are some that will become pivotal to us as an evolving and upcoming country in the world of bonsai. It was said by Ryan that ‘in five years’ time, Australian bonsai will be up there with the best.’ If we continue to explore and develop our own native material we work with, I think we can do it in four.

A shari never shown
Northwest Rendezvous
Bonsai on the red carpet
A consistent club
University of Bonsai
Why sharing?