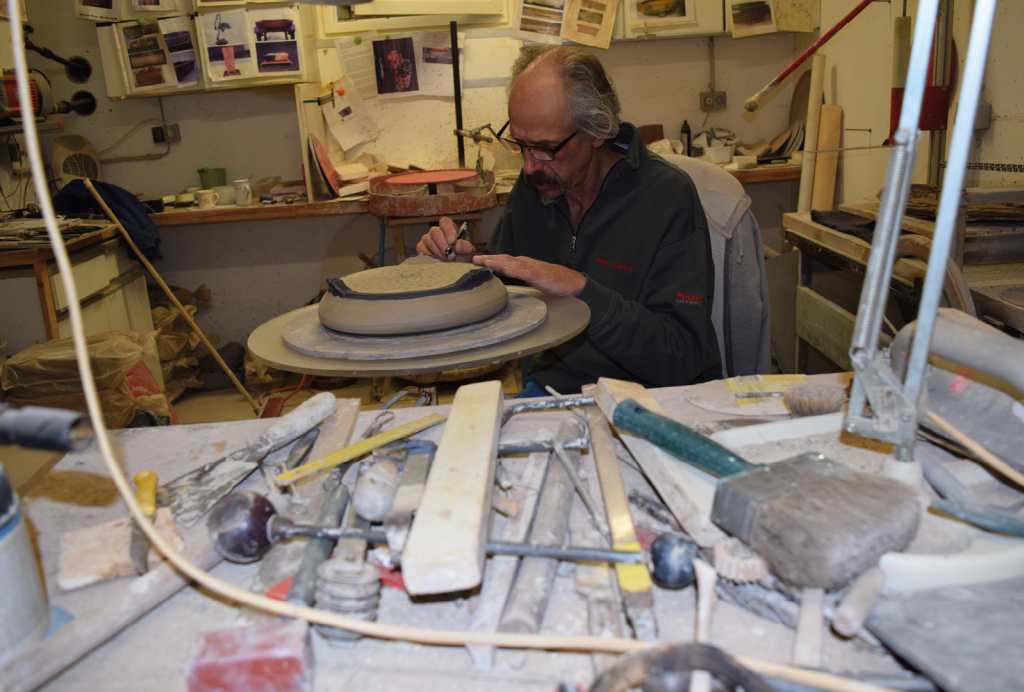 For Walter Venne every bonsai exhibition is like a gallery where an artist can exhibit their work. Through such exhibitions Walter’s pots have found their way into the hands of many bonsai enthusiasts and Masters.

It began via my hobby of bonsai, more than 40 years ago. I had a balcony with my first small apartment, decorated by flower pots with acorns and chestnuts. At some point they started to germinate, so I planted those in other flower pots and if they became too big I’d cut off the top.

At that time, I had no knowledge of bonsai. Then you see a bonsai for the first time, are fascinated by it and the spark springs to life. I first went to the library for some information about bonsai. I started collecting everything that looked like a tree. Soon the space on the balcony was swamped by bonsai.

I saw an announcement of an exhibition in Heidelberg, at the time, the only bonsai centre in Germany. So I went there and it was like a world trip to me. I stood in a bamboo forest with Japanese stone lanterns, water splashing and bonsai like I’ve never seen before, nor since, then it became my hobby.

Who was your teacher?

I did not have a teacher. I have learned from all the mistakes one can make. The most important thing is patience just as with bonsai. If I had not been such a patient person, I would have given up very quickly.

What is your philosophy on bonsai ceramics?

I’m not sure that I can say that I have a philosophy on making bonsai pots. The whole thing just developed in this way. First, because there were no bonsai pots here, then because it’s fun, now I cannot stop making them.

Do you make your own glazes?

I use finished glazes, but rather like to experiment with then. I run glazes into one another or, with additives, change the way they flow.

What do think of the Japanese glazes, tones and shapes?

Of course, when I started to make pottery many years ago I copied classic Japanese pots. Now I’m no longer interested in the classical Japanese shapes. I want to carry on in my way and make individual pots. Then I want to make more of my own creations. I’ve made pots that look like they’re made from wood, or rock slabs that appear to be petrified wood, or pots the surface of which look like bronze.

I hope that I never run out of ideas

So I hope that I never run out of ideas and that my customers keep appreciating my work. Of course, I would like to visit Japan, but I don’t think it would change my way of working.

What or who inspires you?

Plenty of things. I see in nature wood, stones, plants and so on. From these I get ideas for the shapes and the surfaces of the pots.
Anything with a beautiful shape inspires me, it can be furniture, works of art, or even cars!

What do you like about bonsai and making pots for bonsai?

Bonsai has always been a little escape from everyday life for me, a way to switch off and come to rest. When I make pots, I love it when I can fully exploit my imagination. I still have a lot of ideas. It does not matter if I cannot sell the pots created through my imagination.

Moulds, slipcasts or hand shaped, which do you prefer?

I don’t use any moulds for my pots, but I have some plaster casts of so-called ‘cloud feet’ that are added to the pot and shaped in such way that they don’t have a similarity to the cast.

Can you make a living from your pots?

I do not have to live from making pots. I’m now retired and if I wanted to make money, I would do something completely different. I see myself as a craftsman. For me every bonsai exhibition is like a gallery where the artist exhibits his works. At the start, I made pots for my own use, I didn’t think it would become a trade. It’s not about earning money, it’s a pleasure to me if my pots are well received by the customers. I am even happier when I see my pots at exhibitions, or in bonsai magazines.

So how do you see your future as a potter?

I’d prefer not to do commissions in the future. I don’t like using the calculator and making the same shape and glaze multiple times so that maybe one will suit the customer. It’s like a curse, these pots always go wrong, or break. I could spend the same time making much more beautiful pots.

Which was the most difficult pot you made?

This was a 6-angled pot, a commission from Walter Pall. Speaking of difficult, I do have bonsai myself and what much unnerved me was that you always, had to cover the drainage holes with netting before planting the tree. This netting then started to grow into the root ball. My pots have a grid with small holes at the base. These holes can be used to attach invisible anchoring wires. Another thing I found out is that the grid creates a fine sub-climate for the root ball.