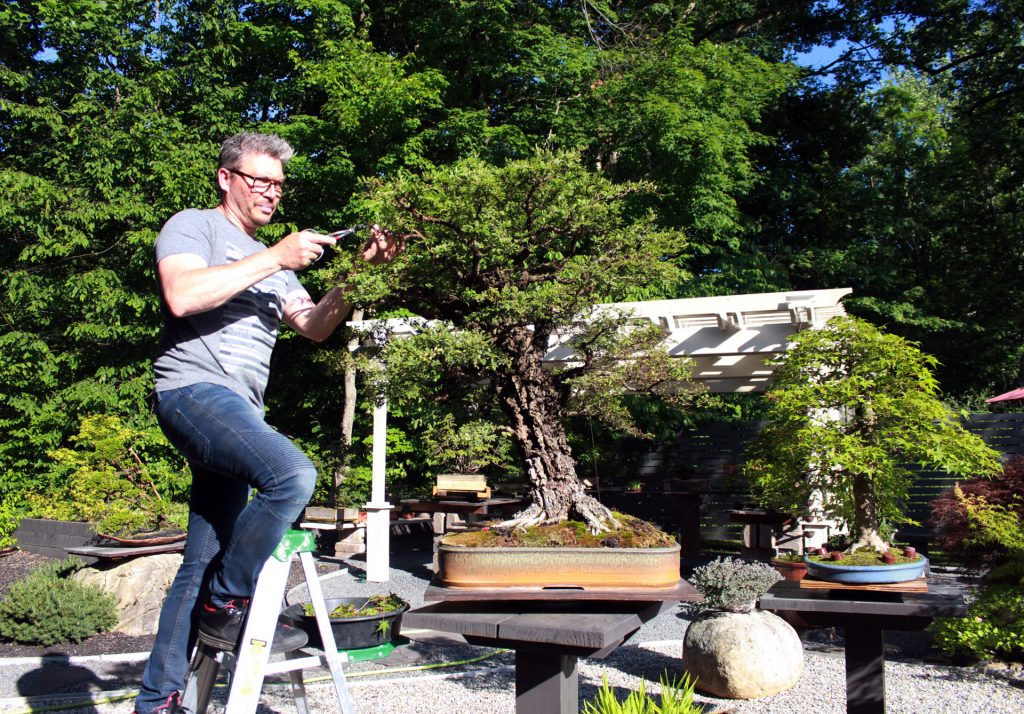 The bonsai passion of Sergio Cuan

A huge fan of deciduous trees, Sergio Cuan, at first thought that bonsai might be just too difficult to grow.

What is your professional education?

I studied fine arts, illustration and graphic design at the Pratt Institute School of Art & Design in Brooklyn, New York. After graduation, I held various jobs as a muralist, illustrator, toy designer, graphic designer and currently I am a creative director overseeing the design, execution and overall branding of hotels and resorts for a major entertainment company.

I have been fascinated by plants since I was a child. When I was 15 my parents gave me a small Juniperus procumbens bonsai for my birthday. The instructions stated that it could be kept indoors under good light, over a humidity tray and misted regularly. I did as instructed and a week later the tree was beginning to turn yellow. But by the third or fourth week the little juniper was gone. I was extremely disappointed and thought bonsai was just too hard to keep alive. Perhaps I needed some sort of magical touch that I clearly did not possess. Some years later, after graduating from college, I again became interested in bonsai. When I purchased one, a salesperson advised me that they are not some sort of biologically mutated plants, but rather real trees exactly like those we see growing in the wild. They needed their rain, their air, their sunlight, even their winter rest. It then all clicked and changed my whole perspective on what bonsai is.

Perhaps I needed some sort of magical touch

Who is your bonsai teacher, and what is the most important thing you learned?

I am largely self-taught. Nowadays, with the advent of the internet revolution, information is freely available. I watched many YouTube videos, attended countless demonstrations, carefully studied trees from people I respected and read all that I could on the subject. Recently, however, I have invested further in my own bonsai education and have worked directly with some top world Masters including Bill Valavanis, Mauro Stemberger and Bjorn Bjorholm. I would be remiss if I did not include Mirai Live, which has been an incredible resource and learning tool for me. Perhaps one of my most important lessons was to put the health of the trees first and foremost. Without doing that, bonsai is not possible.

Do you have plans to study in Japan?

I do not have any immediate plans to study in Japan. However, I have been there twice and am planning a third visit in the near future. In my travels there I had the honour of meeting some of the most renowned bonsai Masters, including
Masahiko Kimura, Nobuichi Urushibata and Kunio Kobayashi. Although I did not study directly with any of them, you can also learn much by simply observing.

Your thoughts on bonsai?

Bonsai for me is without a doubt an art form and not simply a craft. It shares all the design fundamentals found in other forms of visual expression, painting and sculpture. for example. Line, balance, rhythm, contrast, visual pauses (as in negative areas) and so on are all design tools that we use in unison to create a singular artistic statement. In bonsai, as we work with living plant material it adds an added dimension that is exclusive to this art form. Bonsai constantly evolves and the artist must respond to this and change along with it. As bonsai artists we establish a continuous dialogue with our trees that can sometimes span an entire lifetime. A bonsai is poetry in motion, never static, nor is it ever truly finished. It is this pursuit of what I see as seemingly impossible that maintains my fascination with this unique art form.

Any other interests or hobbies besides bonsai?

I used to paint and draw, but it became very difficult to continue in addition to my day job responsibilities. Perhaps one day when I have more time I may again return to them. For well over a decade I maintained a reef tank with live corals. But it needed such commitment that it began to interfere with my everyday life and my passion for bonsai. So now I can say that bonsai has become my second job and my one and only hobby.

I like working on deciduous species, in particular Acer palmatum. I think that this species represents the quintessential deciduous tree model. You get everything with Japanese maple: spectacular autumn colour gorgeous bark, fine ramification and beautiful leaves. The species is also able to readily respond to many various horticultural techniques in a relatively short amount of time.

It is tough for me to pick one favourite tree. However, if I had to choose one, I would say an Acer palmatum, which I often refer to as simply maple #5. This tree has become important to me as I think it represents my overall artistic approach and sensibility. I was able to transform it, using air layering and grafting techniques, from an average looking single-trunk tree into a tall and elegant twin-trunk design. This tree showed me the technical and creative possibilities attainable with deciduous species through the precise and careful application of horticultural techniques. I was highly encouraged and inspired by this and it helped to propel my bonsai passion forward.

What is your worst mistake?

My worst mistake was not having applied myself more seriously to bonsai earlier in life. So, my advice is to start as early as possible. Bonsai is long and life is short!

You get everything with Japanese maples

What is your best achievement?

I would have to say winning best deciduous award at the 4th US National Bonsai Exhibition, the largest and most important of its kind in the US. This was my first time showing at an exhibition of such calibre. That award was the last thing I expected, especially after seeing the quality of the bonsai being exhibited that year.

Your dream comes true when?

A museum selects one of my trees to be part of its permanent collection.
Do you favour the Japanese or Western bonsai style?
I admire both Western and Japanese for different reasons. I deeply respect the discipline Japanese bonsai demonstrates. There is something about the rigour of technique and attention to detail that is awe inspiring and second to none. But Western bonsai at the highest level shows superb technique while still influenced by Japanese aesthetics. I believe there is also a greater willingness to ‘colour outside the lines’, to take creative risks. A desire to innovate and discover new creative solutions is the spark needed to propel any art form forward.

What makes deciduous trees so special for you?

Deciduous species are always changing. Each season they bring something new and different. In my opinion Japanese maples in particular represent the very essence of the deciduous genre. It is no surprise that they are so highly prized in Japan and elsewhere. The intricacy of their winter silhouette is a sight to behold and their spectacular array of autumn colours can set ablaze any garden.

There is a greater willingness to
‘colour’ outside the lines

Besides their beautiful ever-changing appearance, as an artist, I tend to favour line as an expressive tool instead of just using broad strokes to describe form and volume. Deciduous bonsai are designed to be best appreciated in the winter months without leaves. I see the naked branches as beautiful lines on a tree. Thus, for me, in a deciduous bonsai, it is the use of these carefully composed convergent lines (branches) that in their totality evoke an image of a tree in nature. In contrast, I see conifers expressed as broad strokes rather than described by line.