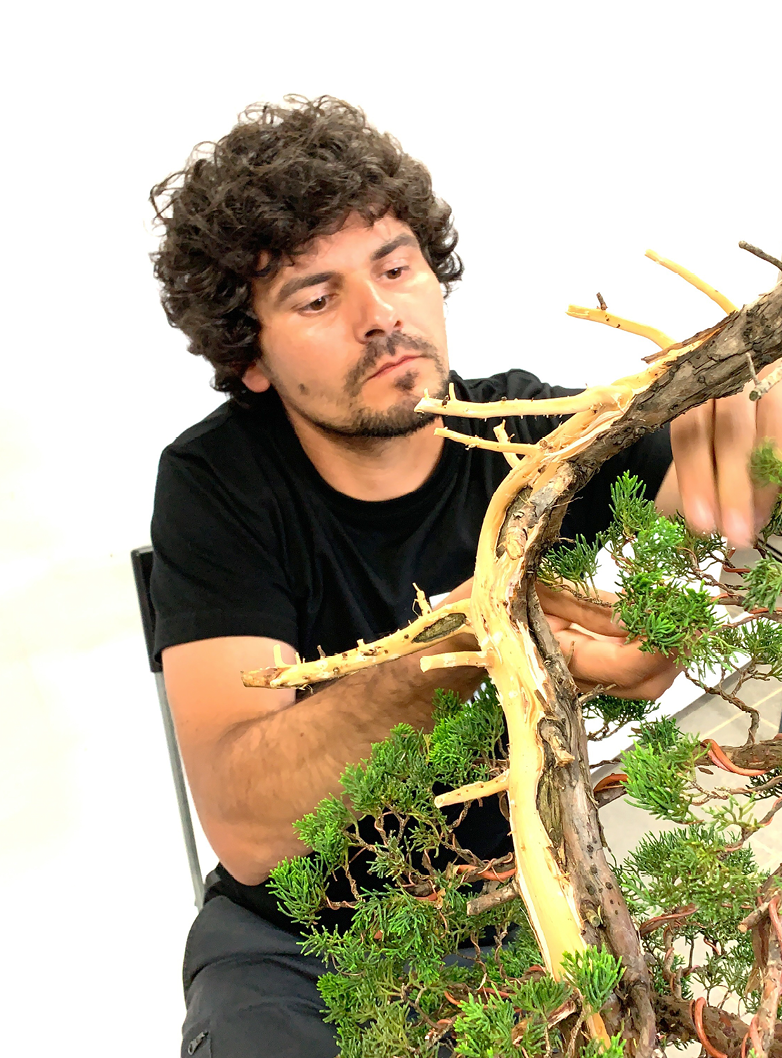 The only regret Manuel Germade has is the fact that he did not go to Japan much earlier. A couple of years ago he officially graduated as a bonsai Master and he now finds his way in the West exhibiting and sharing his knowledge.

What was your professional education?

I studied plant biology at university. I love nature, plants particularly, so these are what most of my education revolved around. Since I was a child I’ve spent much time in horticulture, gardening and bonsai. I always dreamed of having my own nursery where I would grow plants to sell, to work on, to study — and from which I can earn a living.

I saw my first bonsai in a shopping mall. I was there with my aunt. I discovered it when taking a look in the gardening area. I tried to convince my aunt to buy it for me. She refused at first, but I was very insistent, so I eventually received it as a present. Unfortunately it died very soon after. But then I started thinking about what I could use to fill the empty pot. I took a tree out of the garden and it worked very well at the beginning. So this was all the encouragement I needed to dive into bonsai.

Who was your bonsai teacher?

During my apprenticeship I had two teachers. Nobuichi Urushibata taught me at the start and his son, Taiga Urushibata, at the end. It was a difficult time for me because they are very different. I suffered a big change halfway through my apprenticeship. In the end I felt very lucky as I learned much from both. I received two different visions as to what I could read into bonsai and how to create it and make it real. Quite the most important thing I learned from them is how to manage bonsai as a profession not just as a hobby. It completely changed my approach to bonsai.

How did you manage to live with the different cultures within Spain and Japan?

It was the hardest part. The difference is so great that you are almost always in trouble. It was very difficult for me to say or to do the right thing most of the time. Misunderstandings were frequent, so I tried always to be polite and respectful. Unfortunately, sometimes what I wanted to do with every good intention was not understood that way.

How did you communicate, in Japan?

At the beginning in English. Then I tried to learn Japanese on my own. So I started talking a mixture of both languages. I used Japanese as much as I could. And when I didn’t understand something I had to use English. Taiga forced me to speak Japanese. I worked from very early in the morning until late at night, so when I tried to study after dinner I fell asleep.

How did you come to choose Urushibata’s garden?

I began reading about bonsai in books and magazines to learn on my own. At that time I looked at some articles about Nobuichi Urushibata. I was surprised by some of his work in maples. He used to make crazy graftings on them. That was a part of bonsai I loved, especially as, at the start I only had deciduous trees. So I decided that I wanted him to teach me. He taught me all the techniques, which he called the ‘Frankenstein Style’. For different reasons he wasn’t able to continue teaching me, so he wanted his son, Taiga, to continue.

HE TAUGHT ME ALL THE ‘FRANKENSTEIN’ TECHNIQUES

At first Taiga rejected this idea, but after a while he accepted me as his apprentice. It was a very hard time for me because Taiga was very strict. I was nearing the end of that period. But I didn’t want to quit. I wanted to reach my goal and to resist until the end. Despite being that hard, I think I would do it again. It is a very hard system, but it works. He taught me many new things and that completely changed my approach to bonsai. I am very grateful to them. To the father for believing in me and to the son for giving me the chance of becoming his apprentice. They taught me about bonsai and about life. And they looked after me for long time.

What does it take to become a bonsai Master?

When I started doing bonsai I wanted to know how to keep my trees alive and healthy. Then I wanted to learn more to improve their level and to get nice trees in my own collection. By the end I wanted to learn with the intention of being a bonsai professional. I wanted to make a living doing what I liked the most. To work on bonsai, but also teach and spread the art of bonsai. And I didn’t want to fool people by teaching them a few things that I learned previously.

I wanted to answer their questions. I wanted to do it safely and with conviction. So I think the only way to do that is to learn in a system that is focused on that. Become an apprentice, be taught by a true professional. Graduate and get the certificate that recognizes you as a bonsai Master.

Is there a striking difference in approach between European bonsai and Japanese?

The main difference is that the Japanese have a more professional approach. In their country bonsai is recognized as a profession. It is well regulated. There is a system, there are some rules and they follow them. There is an institution that regulates the work of professionals and fights for their rights. But here the bonsai is not recognized as a profession. So each one exercises the trade as he can or wants. And this causes a lot of unfair competition. Because anyone can say that they are professional. Without having been properly trained.

Today most of the techniques applied in Europe are the same as the Japanese. My advantage as an apprentice was when you study in a long-term apprenticeship you have the chance to see the technique live. You can understand it clearly, you can repeat it and see how it works.

The Japanese method is much harder, but in the end it is much more effective. They force you to give more than you think you can give to make sure that you are better and that you can use it for yourself. The workday is very long, intense and there is hardly any rest. Things are much more relaxed here; however, relaxation and conformism go hand in hand and that is what prevents us from improving.

Tell us what is your philosophy on bonsai?

One of my priorities is to continue to learn, to continue teaching. I learned much in Japan, but I am still learning every day. I keep working hard to improve. When you are alone you must solve the problems yourself. So you are forced to look for solutions. I still need to answer many questions. Taiga taught me that if you have the feeling that you already know everything, or that you are already good enough, you will never improve.

Another point in my philosophy is that any tree can be useful to create bonsai, even if uninteresting, weak, damaged or abandoned. We just have to find a way to recover it and make it beautiful, natural and credible. It doesn’t matter if it grows from a seed, a cutting, a graft or directly from the trunk. A single bud is enough to create a brand new bonsai. My motto is ‘Gomo Bonsai’. In Galician ‘Gomo’ means outbreak. And everything in bonsai comes from a single shoot.

I like working on different species, in different sizes and at different stages of development. It is very good to open your mind and to improve your skills. It is something that I learned at Taisho-en. I enjoy working on yamadori material, but I also love to create bonsai from the beginning.
I like to work on deciduous trees because it reminds me of my origins. I can enjoy applying the techniques that I learned from Nobuichi Urushibata. I also try to work them in a more natural way using very little wire. I also enjoy trying to work with species that are typical of the area where I live: Quercus, Prunus, Crataegus, Betula, Arbutus, Salix, and Erica to mention a few.

YOU WILL NEVER IMPROVE IF YOU THINK
THAT YOU ALREADY KNOW IT ALL.

I prefer the Japanese style. It’s the one I’ve studied and the one I know. I really don’t understand many of the trees that I see here. Compared with what I have been taught I tend to see many trees that are unbalanced. I think that before starting to create and innovate everyone should know the basics. To be able to do bonsai you have to understand how the Japanese approach works. What standards and what basic principles they follow. And once you have acquired that knowledge and those techniques, you can take a different direction looking for your own style. Which often arises unconsciously.

How do you see yourself in 5 years’ time?

I would like to have a place in which I can carry out my ideas and my projects. Somewhere I can work each day doing what I like the most. But also a place where I can pass on my knowledge to others. So every day I work hard to bring these plans to fruition. I’m still far from getting everything I want, but at the same time I’m getting ever closer.