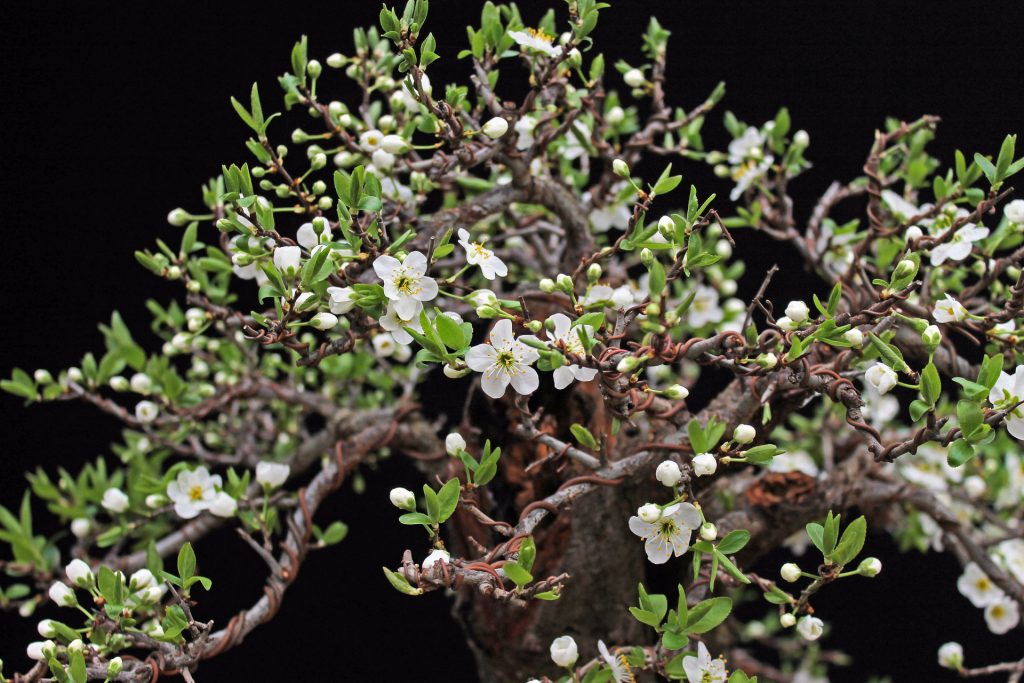 Prunus spinosa is a tree species native to the UK and Northern Europe and incredibly desirable for bonsai. Wild blackthorn flowers profusely in March/April each year and is always a few weeks ahead of the white flowers of Crataegus monogyna/hawthorn. Blackthorn also starts to flower on much younger wood than hawthorn and, as bonsai, at a far earlier stage of development. The flowers are followed by purple fruit, known as sloe, in late summer, adding to its appearance through the winter. Probably the most attractive aspect of its appearance is the black bark on mature wood; when wet it becomes jet-black and is a stunning contrast to the purple sloes and white flowers.

Although blackthorn grows abundantly in grassland and scrub habitats, it is more normally found with thin wiry trunks that repeatedly sucker at a young age and creating a mass of small trees that have little use for bonsai. When developed as field grown material, it is much like the equally common native, the hawthorn, in that it will grow quickly, but take many years to develop a substantial trunk.

Obtaining material that is suitable for use as bonsai entails looking for locations where there are rabbit, deer and sheep populations that will eat the new suckers around a main trunk as they emerge in the growing season. Blackthorn is often found growing in very well-drained soils and, as a result will have root-systems that are very wide-ranging, travelling many metres away from the base of the tree.
Collecting blackthorn from the ground can often lead to recovery of just a few thicker surface roots. Fortunately, given a good soil mix with plenty of pumice, it seems to recover from collection much more easily than hawthorn.

Trees, with thick trunks and plenty of movement, are like gold dust!

This Prunus spinosa/blackthorn bonsai was collected and developed by bonsai potter John Pitt and is an excellent example of a wild blackthorn. John is also the maker of the pot that the tree is growing in. Blackthorn is rarely seen with traditional heavy trunks and instead is given a light and airy ‘deciduous literati’ feel, with emphasis on good movement of the trunk and the branches.

The subject of this styling is a yamadori Prunus spinosa collected 3 years previously by my apprentice, Sean Stolp. It has a mixture of very good characteristics such as great vigour and strength, many new branches that have grown since collection for me to work with, black bark that becomes jet-black when wet, and a great flared trunk base.
On the other hand — there’s a terrible straight and untapered section in the middle section of the trunk that is problematic!

If this was a more commonly available species, I might not bother to pursue a design on a tree with this straight section of trunk. Or, I’d consider radically reducing it in height to remove or reduce the straight section. But, as blackthorn is difficult to obtain and so valuable, it is worth spending that extra time and effort creating a convincing solution to its faults.

Close examination of the tree has also revealed that despite such a straight section of wood, the live veins within it spiral around the trunk and this can be used to our advantage. This is a strange phenomenon, which I have found on many of the blackthorn we have collected from the same location.

My chosen front for the blackthorn after close inspection of the trunk and removal of the weeds. From this view, the trunkline is pleasing and the straight section is not as prominent. I do lose some of the power of the base from this angle, but on balance this is the best view to work with.
Notice that the tree is very apically dominant. There are a lot of strong apical shoots at the top of the tree and just one weak lower shoot. This, again, is typical of blackthorn and is one of the reasons why this species is often designed differently from other deciduous tree species. I will use a literati-style to create a full branch structure, using many dropping branches to fill out the lower areas of the foliage mass and then build a naturalistic apex.

The styling of the tree commences in early February 2020. As with nearly all deciduous species, the ideal time for autumn/winter pruning begins as leaves drop in autumn up until late winter when the dormant buds will start to swell and colour up.
The common name ‘blackthorn’ not only comes from the black colour of the bark, but also the thorns! These razor-sharp thorns do hurt; blackthorn is a species that should be worked on carefully!

As with hawthorn and other flowering deciduous species, blackthorn has two types of growth. Vegetative shoots and flowering spurs. At this stage of development, the vegetative growth is coarse and extends a good distance; these are useful for building the branch structure of the tree as a bonsai. The shorter, and more delicate shoots with thorns at their tips, are flowering spurs. As suggested by the name, these will hopefully carry flowers in the spring. However, while they will ramify in future years, they won’t extend very far and are of no use for forming a branch structure on a bonsai.

After pruning, the tree has been taken back to its basic structure. Although there are now many fewer shoots to use in the initial design, I have removed all that would prove to be ugly in the future when the tree matures as a bonsai. It is better to remove faulted branches now at this stage as, in 4-5 years’ time, it can be very difficult to do this without disrupting the entire appearance of the tree.

The wood of blackthorn is very strong, but brittle. This means that it is difficult to bend shoots older than 2 years and there is little warning before they snap. To enable safer wiring, I like to use a double-coil of a heavier gauge wire than normal. This protects the wood from snapping as easily. An eyelet and guide wire have also been used here so as to pull down an especially difficult bend.

The wire is carefully applied across the tree. In this view from the left-hand side of the tree, you can see that I’ve applied plenty of movement left and right to the branches, as well as up and down. Always try to avoid leaving straight sections of branch.

The lower branches are positioned so that they drop down into the lower areas of the tree and find an ’empty’ position in the overall foliage mass. This will leave a pleasing cascading effect, as long as I am careful not to allow the branches to cross one another when the tree is viewed from the front.

With the basic branch structure established. It is then time to work on the ugly stump in the area of trunk chop at the top of the tree. I also plan to reduce the thickness of the stub to create some taper going into deadwood.

Branches of the tree are wired and re-positioned, as seen from the left side of the tree.

Working on the stump

By the time I have finished working the stump, I have been able to create a very delicate piece of deadwood that is also very hard and well-protected from rotting in the future. The cyanoacrylate can leave a ‘wet’ appearance to the wood, but this disappears after 2-3 months or can be brushed away with steel brushes.

October 2020: With the initial carving and styling completed, the tree was left on my benches in my garden to grow fairly freely. This image taken near the end of the growing season in October 2020 shows the tree and its response to the work I carried out in February.
As the initial styling was carried out in February, before the sap had risen, the tree has responded with many new shoots and ramification has greatly increased over the year.

December 2020: After a full growing season, the tree had started to resemble an overgrown bush. As the last of the leaves dropped for the year, I wired and styled the new growth into position, making the new shoots replicate the general flow of the older branches.
The very top of the trunkline has now been divided into 3 sub-branches and these have been spread out to become the new apex. I also decided to remove one of the two main dropping branches. I felt it was no longer needed given the ramification achieved already

Late March 2021: As leaves begin to open on the tree, I repotted it. A combination of molar clay and chopped bark had been used to pot up the tree after collection. Molar is useful for creating an open soil structure; however, it is the pieces of bark that the blackthorn had rooted into. Despite the obvious success with molar for this tree, I would advise now that pumice and bark, with a little akadama, are a better substrate for newly collected blackthorn.

During the winter I decided to commission a bonsai pot for the blackthorn from Victor Harris at Erin Pottery. He produced this oval with a stunning navy-blue/black glaze and white highlights. This would pick up on the bark and flowers of Prunus spinosa.

March 2021: The tree in its new pot, just one year after its initial styling. Note that I gave the tree a slight turn anti-clockwise when repotting to show the base off to better effect. This has brought one of the dropping branches down and in front of the trunk. For now, I will leave it there, I like the interest and contrast that it brings when set against the trunk.
There are only a handful of opening flower buds at this time and these will open just before the leaves. In future years I hope to have the tree covered in the bright white flowers that contrast so well with the black bark.