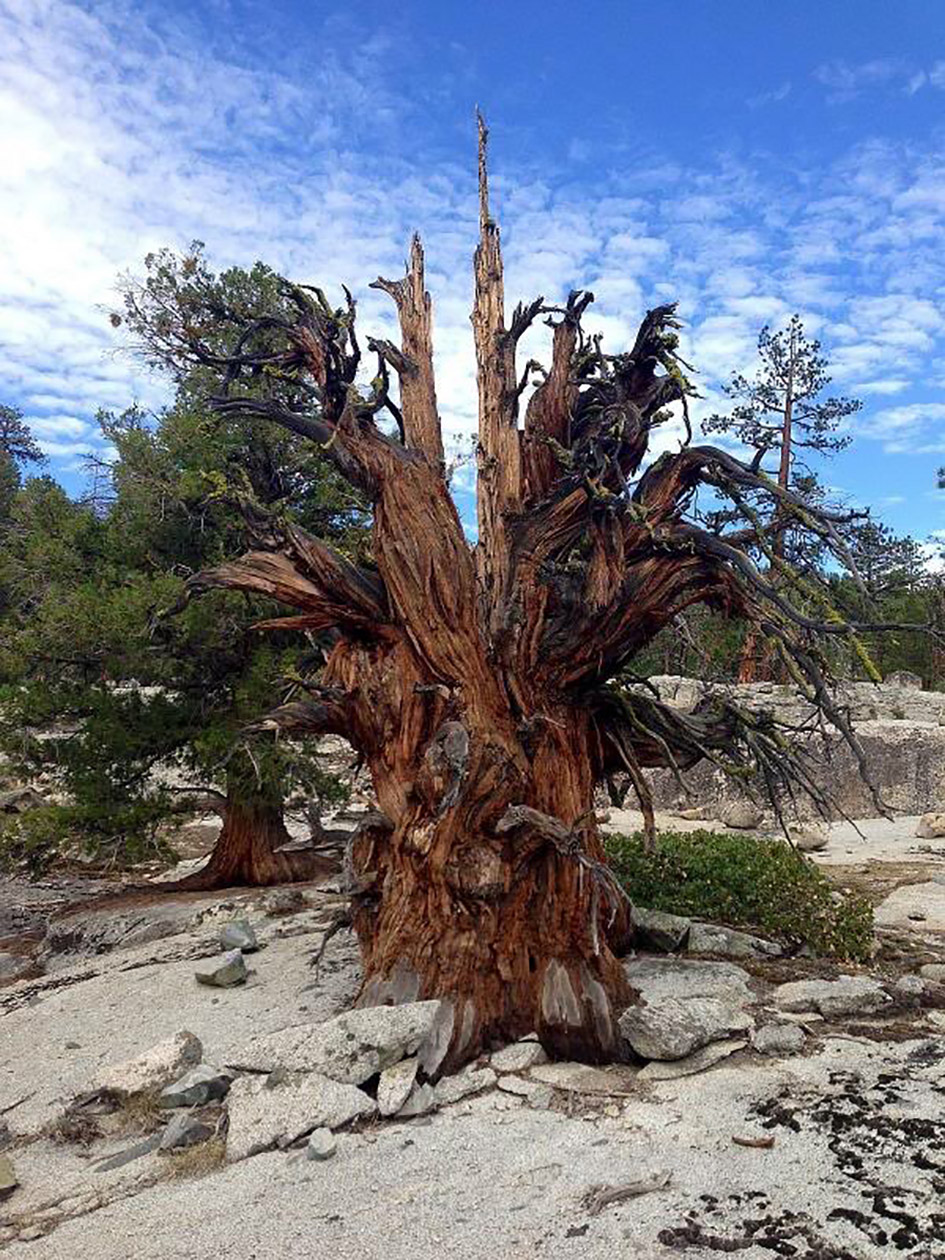 Inspired by the shimpaku junipers in Japan, Jeremiah Lee started to collect wild trees in the rugged Sierra and the Los Padres. He found that their character is quite different from that of their Japanese counterparts.

This Sierra juniper, (Juniperus occidentalis australis) had been collected, with permission, in 2015. In the first picture you can see the tree tied on to my metal frame pack with rope. I was able to obtain a large long root ball when extracting this tree from a pocket of soil on a granite slope. The tree had many fine roots and was transplanted into a long wooden box using 100% sifted pumice as the soil medium.

After one year and seeing strong tip growth I did an initial styling. Over the years, the goal was to shift the flow of the tree from left to right. This involved the cutting back and removing of the long branches on the left while allowing the right primary branch to grow out and elongate. I would also reduce the size of the root ball every other year until it fitted into a ceramic bonsai container. I decided to keep the native foliage on the tree because its genetics were good, offering relatively tight and compact foliage for a Sierra.

I had realized that being up in the mountains was the most beautiful place I’d ever been.

Over the last few years, I’ve been working on it with Peter Tea. I generally cut it back in summer and then wire, adjust and cut back with him in autumn. In 2021, I showed this tree at the US National Bonsai Exhibition in an unglazed Gyouzan container on a David Knittle display table.

I enjoy viewing this tree because of its unique qualities; however, the aesthetics of the trunk are quite different from the junipers you might find at the Kokufu Exhibition. The trunk is relatively flat from front to back and does not have beautiful flowing, ribbony deadwood characteristics like the prized Shimpaku yamadori in Japan. The jin and shari are much more rugged, wild and defining of Occidentalis australis. The deadwood in the upper section of the tree is quite textured being created over years of exposure to the harsh natural environment.

On the viewer’s right side you see an unusual jin peeking from the foliage that was created by a whorl of branching that had died off. This type of jin reminds me of Ibo-Jin which translates to Warty Jin and is prized on tosho or needle juniper. This spikey-jin/Ibo-jin is found on many ancient Sierra junipers in the mountains and it’s a characteristic that I find highly desirable on Sierra yamadori. The best feature of this tree, perhaps, is the unusual live vein. Most junipers look best with more than one live vein, but this has only one, which runs all the way from the left to right.

Another year later, the tree is slowly maturing. Its best feature, perhaps, is the unusual live vein.

Displayed at the US National Bonsai Exhibition, 2021. Planted in a Gyouzan container with a David Knittle display table. Photo: Jeffery San Juan.

Piotr works on a mugo pine
By my front door
On the scrapheap?
See it from a different angle