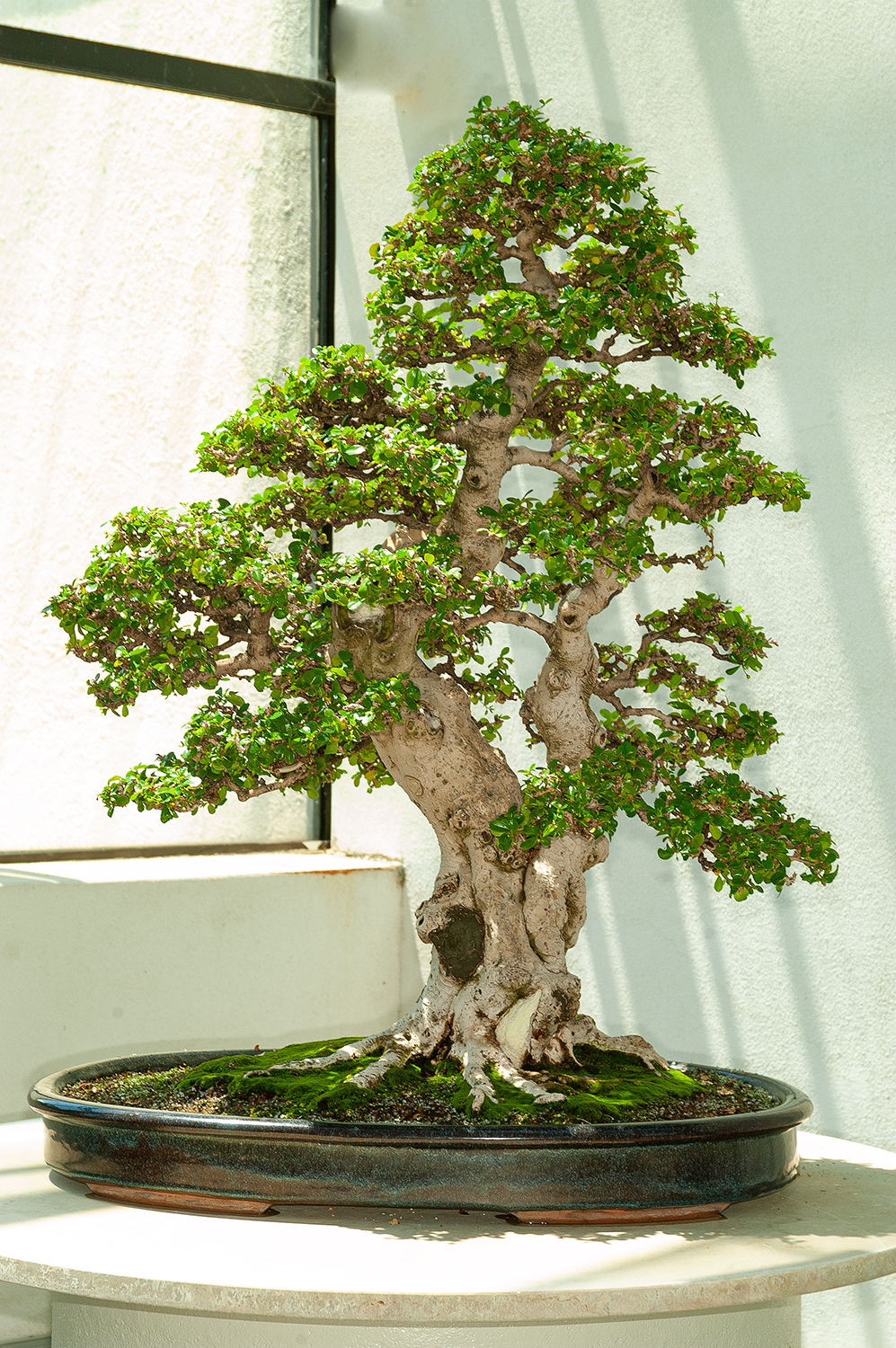 Ehretia Buxifolia is a very common ‘supermarket’ bonsai also known in the bonsai world as Carmona microphylla. It is a nice shrub from the South China province of Fuijan. It’s an evergreen tropical tree, with a grey trunk, shiny, oval dark green leaves and, if you look closely, you will notice that hairs cover them. During the growing season it offers us little white flowers, followed by black berries.

Propagation
You can sow the seeds (the black berries), as soon they are ripe. You
can take cuttings using the softwood branches from June until August.

Soil and repotting
A Carmona imported from China is grown in a very compact clay soil. You have to remove this carefully with a chopstick so as not to damage the roots. Don’t replace it all at one go, but gradually over 2 years at least, and remember that the new soil has to be free draining. For example, use Akadama (80%), with Kiryu (20%), and never add peat or
organic soil. As the roots are fragile repot only every two or three years.

Feeding
Throughout the year give it a light organic fertiliser. Do not use chemical fertilisers that may burn the roots. For slow fertilisation from October to March, it’s better to use pellets, like Biogold.

Watering
The Carmona plant likes water, but its roots are less keen. So check very carefully that the soil stays moist without allowing it to become too dry over a long period. You can also mist it during hot days. In winter reduce watering slightly.

Trimming – Pinching – Pruning
In winter you can trim off the unnecessary branches. Throughout the growing season let the branches grow 6 to 8 leaves, and then prune back to two leaves. Another method that gives good results is defoliation. You can do this in June, but cut off the tip of the branches to obtain new twigs. Styles and wiring Carmona is not usually wired, but styled by pruning. You can wire, but take care because not only is the wood quite brittle, the branches grow so fast that you will probably have to loosen the wires within 3 months or so. All the styles used for deciduous trees seem to be suitable for Carmona. But moyogi is probably the most common style utilised.

Diseases
This is the downside. In the first place scale, aphids, red spider mite, and also snails can attack Carmona. Use only light treatments to fight them (rotenone, mineral oils). Secondly, the roots grow very easily.

If over watered when the soil is too compacted, and the temperatures too cold, the roots can be attacked by phytophptora (fungus). The leaves become black. Then branches die one after the other and it’s too late to treat at this stage. As soon as you see these black leaves repot the tree in healthy new soil. Take off the black parts of the roots, and treat with a very strong dose of Fosetyl-Al or Benlate.

You will be pre-warned of the danger by the leaves changing colour. Some turn yellow, indicating that there is a watering problem. The tree will show the same symptoms when watering too much. Check the soil immediately, and treat as described before. This can all be avoided with good soil, correct light and temperature.

Display
Carmona needs plenty of light. This is essential. When indoor, put it close to a window. During the growing season (April to September) it can go outdoors in full sun. Shade it only during very hot days. Carmona does not like draughts. Nor does it like the cold. It’s better always to give it more than 18degC. Less than this, and you will have problems with the roots. So, when the temperature range is less than 18degC, Carmona will be a strictly indoors bonsai.